Cazuela de Pollo y Aceitunas
The following recipe makes use of fresh herbs, olive oil and olives as well as fresh peppers and other ingredients that give it a distinctly Mediterranean flavour. It is served with couscous which wouldn’t be usually considered a particularly Spanish ingredient yet it is quite common in Granada where Moorish influence of cuisine is most common.

Indeed there are some fine Moorish restaurants in Granada that are well worth a visit if you ever visit that city. 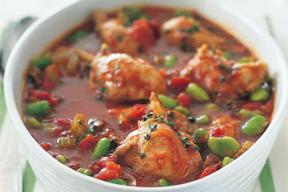 Preheat your oven to 180ºC. Put the chicken and flour into a large bowl and season with salt and pepper. Once you’ve tossed the chicken fully, remove it from the bowl shaking off any excess flour.

Heat two tablespoons of the olive oil in a large casserole dish with a heavy base over a medium heat. Fry the chicken legs in two batches until they’re golden (about 10 minutes) then transfer them to a plate.

Heat the remaining oil in the dish and add the onion, garlic, thyme and oregano. Cook gently with regular stirring until the onion is tender (about 3-4 minutes). Add the white wine and simmer for 30 seconds. Now stir in the tomato and a cup of the stock.

At this point you need to return the golden chicken to the casserole dish, add the red and green peppers and bring the dish to the boil. Now transfer the dish to the oven and and bake for one hour.

Next remove the lid and add the olives and continue to bake the dish for another 30 minutes or until the chicken is tender.

Pour the remaining stock into a saucepan over a medium heat and bring it to the boil. Now place the couscous in a heated bowl and pour the stock over it. Stir the stock into the couscous and allow the it to stand for about 5 minutes until it is fully absorbed. Stirring the couscous with a fork at this stage ensures that all the grains are separated.

Finally, serve the couscous and add the chicken mixture from the saucepan.