Pollo Chilindron
Pollo Chilindron or Chicken with Red Peppers comes from Navarra in the north of Spain but it is a dish which you will find being served all over the country. It is often one of the main courses in a Menu del Dia (menu of the day).

This dish can be as mild or as spicy as you want. If you prefer it to be mild use sweet paprika and if you prefer it hot use spicy paprika. Many Spanish dishes use a lot of oil but if you are cooking everything in one pan you should find that you can use less oil than I have suggested. 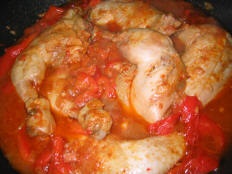 Heat the oil in a large, heavy based frying pan that has a lid or a shallow casserole or if, like me, you don’t have a large enough frying pan use two pans. Fry together the chicken pieces, garlic and onion for about 3-5 minutes until they begin to go golden then push them to one side of the pan or remove them from the pan altogether.

I used a frying pan and a Wok so once the chicken was golden I moved all of the portions into the Wok.

Add the ham and peppers to the frying pan and fry these for 1 or 2 minutes until the peppers soften a little. Then stir everything in the pan together.

HINT: The first time I cooked this dish I was worried that I had left the peppers too big but it wasn’t a problem as they shrink and break up during cooking.

The tomatoes should be skinned and seeded but I find seeding tomatoes a drag. I am very much a believer in trying to make recipes as simple as possible. You can peel and seed them if you want to or be like me and only peel them or alternatively use a 14oz tin of chopped tomatoes.

HINT: To make peeling  the tomatoes easier cut the skin and place them in boiling water for about 1 minute. They should then peel without too much trouble.

Stir in the tomatoes, the chopped chilli, the paprika and the bay leaf, put the lid on the casserole or pan and simmer over a low heat for about 1½ hours when the chicken should be lovely and tender. Quite a lot of juice comes out of both the tomatoes and the red peppers so it is a good idea to remove the lid towards the end of cooking to allow the sauce to reduce.

Add salt and pepper to your taste and remove the bay leaf.

In Spain they would serve this with chips but I prefer to serve it with rice or small boiled potatoes.