Bacalao en Salsa de Tomate
Salt cod can be bought at supermarkets all over Spain and in specialist shops that sell nothing but this rock hard fish. Its history can be traced back to skirmishes between the Vikings and the Basques in the 9th century when the Basques noticed that their attackers were able to survive largely on a diet of dried fish.

The process of salting whale meat was already common amongst the fishermen of the Basque region so they took their salting method and combined it with the Vikings’ salting method to create very long lasting salt fish which enabled them to extend the duration of their fishing expeditions beyond the Bay of Biscay. These journeys took them as far north as Iceland and the Scottish Islands and eventually went as far as Newfoundland where it has been suggested that they were whale fishing before Columbus’s epic journey to the New World.

Today salt cod is a very common part of the Spanish diet though is less readily available elsewhere so for the purpose of the recipe which follows it’s important to note that fresh cod can be used instead of salt cod and is a much more tender alternative.

HINT: To make the tomatoes easier to peel cut the skin with a knife and put them in boiling water for a few seconds then put them in cold water. The skin should then come off a lot easier. 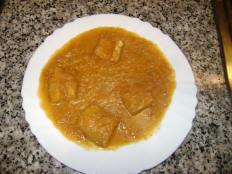 If you are using salt cod remember to soak it for at least 24 hours in advance and change the water about every 8 hours. Drain it well before following this recipe.

The first thing to do is make the tomato sauce. To do this heat the olive oil in a large frying pan and add the onion and green pepper and fry gently until the onion is almost transparent. Then add the finely chopped garlic and continue frying gently for a few minutes more. Add the chopped tomatoes and the oregano to the frying pan, stir the mix then cover and leave to cook on a slow heat for about 10 minutes. Zap this mix in a food blender then return it to the frying pan.

You now have 2 options with the cod one of which is healthier than the other. If you want the healthy option simply cut the cod into chunks, add it to the sauce and simmer for about 10 or 15 minutes.

For the slightly less healthy option cut the cod into chunks, coat it in flour and fry it in a reasonable amount of olive oil until it goes a golden brown colour. Then put it in the tomato sauce and simmer for 5 or 10 minutes.

You may need to add some water to the sauce and you should taste it and season if necessary.

Serve with some boiled potatoes and vegetables and perhaps a little crusty bread.